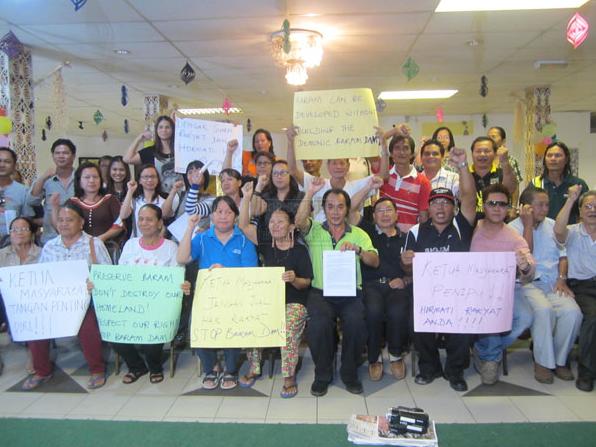 Baram dam protesters make their voices public, but the government is refusing to listen

Indigenous communities from Baram and concerned grassroots NGOs have expressed disgust at Taib’s remarks in front of Headmen yesterday suggesting protests against the Baram Dam were merely caused by stupid local people listening to foreign NGOs and not thinking for themselves.

We refer to the statements made by certain individuals from Baram which was published in the front page column of one of the local dailies, The Borneo Post, dated 26th Nov. 2013 pertaining to the proposed construction of Baram HEP Dam.

We wish to respond and exercise our rights as citizens of this country and of Baram to express our stand, views and comments:-

We the people of Baram, as members of affected communities, have actually voiced our strong concerns and stand against the proposed Baram HEP dam project right from the time we heard and obtained information about the project. We have made our position and stand clear that we don’t want the dam project. We have also written petitions and letters to state our firm objection against the project and submitted them to the government leaders, relevant authorities and project proponents and stated the reasons for such objection. We have taken many initiatives and actions through collective discussion among us as affected and concerned members of communities to highlight our position and objection against the project at the village, district, state and national and even at international level.

As a matter of fact, NGOs, CSOs, concerned groups and individuals only echoed those concerns and expressed their support to our cause because we have sent out appeals for support to as many as we can. Those that respond and support our voices and appeals shared those concerns and grounds for our objection against the project. We are happy and thankful that many groups and civil society organisations at the local, state, national and international levels have expressed their solidarity with us in our ongoing effort to convince the government and project proponent to cancel the dam project. We will do our utmost and exhaust every appropriate channels to assert and defend our rights to our homeland, our source of livelihood, our rights and our future. We also welcome every form of support from all concerned individuals, NGOs, governments, political parties and agencies. 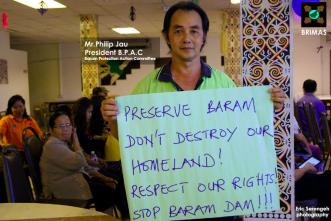 Philip Jau – Chairman of SAVE Rivers

We have our own intelligence and capacity to think and decide for ourselves and our future. We are also fully aware that we have rights to our customary lands, territories and resources. We have rights to determine the kind of development that we regard as appropriate and that which meaningfully benefit us. We need development to improve and to uplift our standard of living, that diversify our present socio-economic activities but not a project that forcibly displace and uproot us from our homelands, gardens, farmlands, resources. That is not development. That is destruction and elimination.

We act with our clear conscience and we do not allow ourselves to be used as tools. Instead, we question the rationale for the employment of the CEO of SEB and the extremely huge amount of salaries and perks that are paid to him. Is he a local? Why he seems to be the person who always represents the government and the SEB in promoting the mega HEP dams? Who actually listens to outsiders? Our concerns and actions are genuine, legitimate and consistent. We have said NO to the Baram HEP dam and that is our position. STOP the Baram Dam!

We deplore the statement made by the newly-appointed Temenggong which claimed that majority of the Baram people support the dam project. This is a lie and misleading statement. He only spoke from his nose because he did not visit all the village communities to have proper and open consultations with the whole villagers that are to be affected by the dam project. We regret to say that this is an irresponsible statement. It does not sound that it comes from a capable, responsible and caring leader. We are also surprised to hear of his appointment as a Temenggong or Kenyah Community Leader. Such appointment is made without consultation and the consensus of the Kenyah or Orang Ulu community in Baram. If his appointment is done from the top or political leaders, it is certain that his statement is made to please those who appointed him and not for the rights, interests and inspirations of the Kenyah and or Orang Ulu community in Baram. We are also aware that those so-called leaders who are brought to Kuching to pledge their support to Taib and for the proposed Baram HEP dam are selectively appointed by the present ruling party who are so desperate to build the dam. They have gone to Kuching without consulting or informing their village people and have not discussed about the people’s concerns about the dam project. As such, their statements are not reliable and not credible and therefore not binding on us. As far as the rakyat of Baram are concerned, we firmly and categorically state herein that any dealings, negotiations or representation made purportedly on behalf of the residents of Baram are not binding and are void.

If the so-called Temenggong and the other so-called community leaders are really caring and willing to listen to the views and stand of the people, we urge and invite them to come and hold an open meeting with us in Long San on a date and time convenient to the rakyat and concerned parties. Leaders Must be Sincere and Speak UP for the Rights and Interests of their Rakyats, NOT used as Tools. Speak the TRUTH!