Just in time for this week’s ASEAN Renewable Energy Week, new scientific results have questioned the economic viability of large dams. Calculations by the Bruno Manser Fund show that the Malaysian Bakun Dam scores even worse than the average large dam.

(OXFORD, UK) Researchers at Oxford University have found that planners and policymakers systematically underestimate the costs and time required to implement large dam projects: the actual costs of large dams were 96 per cent higher than the estimate, on average, and implementation took 44 per cent longer than scheduled.

The new report thus explicitly states that large dams are not economical: “We find that even before accounting for negative impacts on human society and environment, the actual construction costs of large dams are too high to yield a positive return.” The study is based on the most comprehensive economic analysis of large dams ever undertaken. “Large dams” refers to dams with a wall height in excess of 15m.

The study, which is based on a representative sample of 245 large hydropower dams built in 65 different countries between 1934 and 2007, concludes that cost and time overruns have not improved over time. The cost and time forecasts are still as wrong as they were 70 years ago.

The study cites two reasons for these immense cost and time overruns: firstly, both experts and laypersons are systematically “too optimistic about the time, costs, and benefits of a decision”. Secondly, project promoters deceive the decision-makers and the public with strategic misrepresentations.

The new study was released in late March, just in time for the ASEAN Renewable Energy Week 2014, which started yesterday. Southeast Asia’s Energy Ministers are meeting in Kuala Lumpur to discuss their government’s future energy policies. Malaysia is also presenting and promoting its dams. 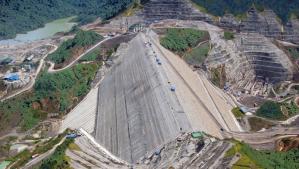 The Malaysian Bakun Dam is one of Asia’s largest dams and had high cost and time overruns.

A closer look at the most recently completed hydropower dam in Malaysia, the Bakun Dam, however, shows that this dam scores worse than the average large dam. The Bakun Dam was meant to cost RM2.5 billion. While the official expenditure figures have risen to RM7.4 billion, the two scientists, Sovacool and Bulan, put the total cost of the Bakun Dam at RM15.325 billion. When construction work commenced in 1994, the dam was meant to be operational in 2003. It was actually completed in 2011, but even today, not all eight turbines are operational.

Calculations by the Bruno Manser Fund show that the time overrun at the Bakun Dam was almost 90 per cent and the cost overrun was even 200 to 500 per cent. As the Bakun Dam was financed by the federal government – mainly through the Employees Provident Fund and the Pensions Fund – Malaysia’s citizens are having to pay the price for the over-optimistic forecasts of the Bakun Dam promoters.

With the Sarawak Corridor of Renewable Energy (SCORE), Sarawak is implementing a whole series of uneconomical large dams of this type. The projected costs of US$105 billion for SCORE are therefore likely to rise. The proposed Baram Dam is likely to cost more than RM5 billion rather than the budgeted RM3 billion. Sarawak is playing for high stakes, while the population bears the risks.

To minimize these risks associated with large dams, the Oxford study advises countries at a lower level of economic development to implement energy alternatives that have a shorter implementation span and a smaller budget than large dams. The ASEAN Ministers meeting in Kuala Lumpur ought to take these findings seriously. The time is ripe for turning the focus away from mega-projects that involve great financial risks and moving towards small-scale energy sources that incur lower environmental and social costs. 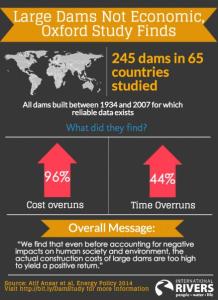 Infographic with findings of the Oxford University (copyright: International Rivers)

Sources for this release: