SAVE Rivers Press Statement: The Pros and Cons - People are aware

SAVE RIVERS would like to thank the Chief Minister Tan Sri Adenan Satem for paying attention to the plight indigenous community who are protesting against the construction of mega hydroelectric dams in Sarawak. (Ref. to Utusan Borneo 8th April 2014)

The state government is planning to build an additional 11 hydroelectric dams in the state after the Murum dam. In Baram, the people have placed two blockades which are now on their 169th days. These blockades are to stop preparatory works on the controversial dam which is forced on the people without the required Free Prior and Informed Consent (FPIC).

Adenan said the locals resist the dam because the people are not aware of the benefits of the hydro dam and ‘poisoned by NGO’. However, it seems that Adenan is either being misinformed by his advisors or he is just doing the biddings of his predecessor, Abdul Taib Mahmud, who is now the current Head of State (TYT) to continue with his destructive policies of exploiting the lands, territories and resources of the natives in Sarawak. 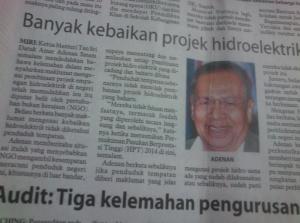 All the hydroelectric dams built in Sarawak over the past decades have proven that the natives who gave ways for the dam had not benefited from this so-called development. In the words of Richard Taylor the CEO of the International Hydropower Association, the dams built in Sarawak have a “legacy of problems”. This statement by Richard Taylor is recorded on the video “Save Sarawak. Stop the Dam”.The first dam in the state, Batang Ai dam built in the 1980s, some 3,000 people from 26 longhouses were displaced. Most of them have yet to receive their land title until today.

Some of them had passed away without seeing their promised land. They were promised free electricity and now they have to pay for it like anyone else. The second hydroelectric dam in the state was Bakun dam where some 10,000 people were relocated to the Sungai Asap resettlement scheme. The unsatisfactory scheme such as unsuitable land for farming, unreasonable and incomplete compensation, poor quality of houses, lack of infrastructures, etc, had been frequently highlighted. The third dam completed last year, Murum dam, with experiences incorporated from two previous failed resettlement projects, is also disappointing. The people were promised RM850 per month for five years. RM600 is for goods and food stuffs and RM250 cash every month. However, the people are complaining that the cost price for the goods and food stuffs given to them is only worth RM200.

“The chief minister would not say this if he really understands the problems faced by the displaced indigenous community.

“Just after becoming the Chief Minister of Sarawak, Adenan said he is willing to listen to the people. Then, please, go as ordinary person with minimal protocol and listen to the problems faced by the indigenous community who are displaced by the dams,” said SAVE RIVER chairman Peter Kallang.