BRIMAS Press Statement: Natives from Tinjar and Serian up in arms over MPOB directive to not buy oil palm fruits from villagers 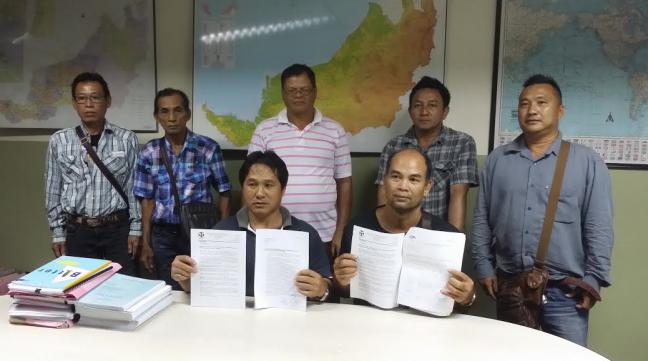 MIRI – Villagers from Long Tuyut, Sungai Pelajau, Loagan Bunut and Long Teru, Tinjar, Baram and villagers from Kampung Lebor, Serian are crying foul over the actions of the Malaysian Palm Oil Board’s (MBOB) directive to oil palm ramps and mills to not receive and buy fresh oil palm fruit bunches from these villages.

The villagers from the four villages in Tinjar have planted and harvested their own oil palm on their own native customary rights (NCR) land, but just because they are currently in a legal dispute with Boustead PELITA Tinjar Sdn. Bhd., a joint venture (JV) company between an oil palm company from Peninsular Malaysia, Boustead Holdings and the state own government agency, PELITA, over their NCR lands, MPOB refuses to buy oil palm from the villagers.

The villagers in Tinjar are not happy that MPOB is playing “judge and executioner” for penalising the villagers before any decision is made in the Court of law.

“MPOB are making allegations without any proof that we are stealing fresh oil palm fruit bunches from the company and therefore giving a directive to oil palm mills and ramps to not buy our fruits”, said Litus Jau from Loagan Bunut.

“Instead of being professional and not taking sides, MPOB is treating us like criminals”, said another villager, Adi Anak Ajok from Long Tuyut.

According to Jengga Anak Jeli, the head of the village cooperative, he was given a show cause letter from MPOB demanding an explanation why his licensed should not be suspended or revoked for allegedly stealing oil palm fruits from another JV company, TH PELITA Gedong.

“The Courts have decided that the land is ours, how can MPOB accuse us of stealing on our own land”, said Jengga.

“The Government has always promoted oil palm as part of developing the rural areas and uplifting natives from poverty. However, when the natives have the means to develop their own land with oil palm, the Government tries to restrict us from doing so.

“Big companies are given many incentives to develop oil palm on the natives NCR lands, but we natives are sidelined. This reeks of double standards”, fumes Jengga.

As with the case in Tinjar, MPOB is giving the same directive to oil palm mills and ramps to not buy fresh oil palm fruit bunches from the village of Kampung Lebor.

According to Jengga, if a solution is not found soon with MPOB, the villagers of Kampung Lebor are contemplating taking legal action against MPOB.

BRIMAS is off the opinion that MPOB should act impartially and professionally in this matter. They should not be the ones to decide on who has NCR over land in Sarawak. As a government agency, MPOB should be reminded that their priority is to serve the people and the company should be secondary.