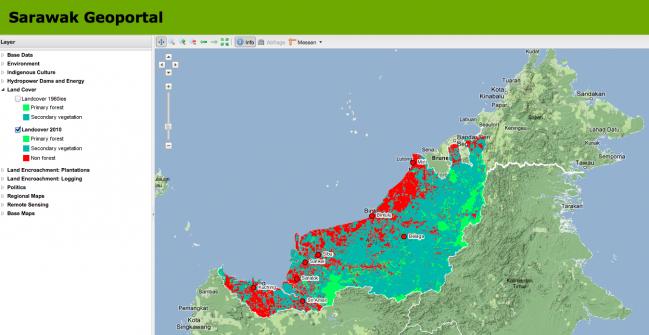 A new interactive web-database launched by the Bruno Manser Fund creates transparency on land use in the Malaysian state of Sarawak. The site releases hitherto confidential official maps and detailed information on land use changes and rainforest destruction in Sarawak.

A large database containing hitherto confidential 1:50,000 topographic maps of the Malaysian state of Sarawak has gone online today with the launching of the Sarawak Geoportal by the Swiss NGO, the Bruno Manser Fund. The online tool includes an overview of concessions granted for logging and palm-oil plantations as well as raw data on the rapid deforestation of Sarawak. Important geographic data on Sarawak, such as the exact location of villages, roads, rivers, the use of land and vegetation types are freely available to public scrutiny.

The Sarawak Geoportal, which is based on data digitised over five years by the Bruno Manser Fund, helps understand the environmental, social and political developments in Sarawak, Malaysia’s largest state in Borneo. The data can be overlayed with Google topographic and satellite maps.

The Bruno Manser Fund (BMF) has launched this online tool to challenge the Sarawak state government’s secretive dealing with important land use information. “All this information should have been made public by the Sarawak government long ago”, BMF director Lukas Straumann said. “The data have deliberately been shut away in order to facilitate the land grab by the political elite under outgoing Chief Minister Taib Mahmud. We expect that the next government will release all relevant land use data to the public. The importance of public access to environmental information has been recognized by the United Nations’ Aarhus Convention.”

Sarawak’s indigenous people are rarely informed in a transparent way about government projects that involve their native lands. Recently, indigenous communities affected by the construction of the controversial Murum dam only learnt about their resettlement shortly before they had to move.

The Sarawak Geoportal also provides evidence-based information on deforestation, a process that is typically misrepresented by the Sarawak government for political reasons. According to 2009 satellite imagery analysed by Sarawak Geoportal, a maximum of 11% of the area of Sarawak remain covered by primeval forest.

To learn how to use the Geoportal, you can watch an introductory video

The Sarawak Geoportal is an integral part of BMF’s new website, www.bmf.ch