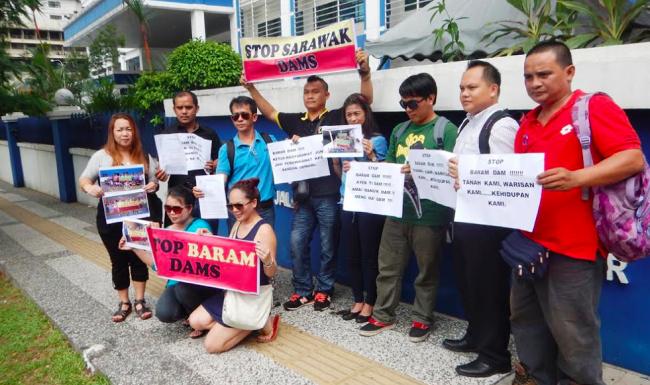 KUALA LUMPUR – Today, concerned residents from Baram, Sarawak who are working in the nation’s capital, lodged police reports to affirm their opposition to the proposed Baram Hydroelectric Project. Their action comes in response to the recent statement by Sarawak’s Chief Minister that local leaders have endorsed the building of the 1200 megawatt dam. Gathered in front of the Dang Wangi police station, they expressed their solidarity with families and neighbouring settlements that continue to oppose the project.

On 7th May 2015, the Borneo Post reported on Sarawak’s Chief Minister Adenan claims that support for Sarawak Energy Berhad’s (SEB) Baram Hydroelectric Project had been granted by community leaders in a closed door session, despite the fact that for nearly 600 days, Baram landowners have been blockading the access points for the project construction, underlining widespread collective opposition to the dam.

“We were shocked when we read about the Chief Minister’s statement. As landowners from Baram, who remain connected to the lands of our ancestors, we are joining with the majority of Baram residents in opposition to the dam,” explained Wesley Ngau Yan from Long Tungun, who currently works in Kuala Lumpur..

“There are 20,000 of us who stand to be affected by the proposed dam. Nearly 400 square kilometers of forest and land our families depend upon for food will be flooded. Sarawak Energy has failed to seek or obtain our free, prior and informed consent for the project. We also have never seen any environmental or impact assessment for the project. Apparently, no such studies have ever been approved by our government. So why is our Chief Minister announcing the project will go ahead?”

“Several police reports have already been lodged in Miri by families who would lose their land and livelihood if the dam goes ahead. We, too, have decided to assert our rights as outlined in our nation’s constitution, and file police reports here in KL,” continued Wesley.

According to another resident of Baram filing a report, Charles Gau from Long Banyok, “Baram is still our home. We return to our land every year – our parents, brothers and sisters all live there; they are raising their children there.”

He continued, “We know that the forests and rivers make a critical contribution to keeping us alive. We are taking a stand to protect the lungs and lifeblood of the earth. People in Sarawak, nationally and internationally need to know, there is absolutely no practical reason for building the Baram Dam.”

He added, “We already have two other mega-dams, Bakun and Murum. These dams are not even functioning at full capacity. There is no evidence of meaningful development for the people affected by Bakun and Murum, and no proof of demand for the electricity to be generated by the Baram dam. In reality, if this project is built, it will impoverish us all, destroying our heritage, not only for us as Kenyah, Kayan and Penans, but also for all of us, as an entire nation.”