Local Sarawak activist says 'No to hypocrisy, Yes to Freedom of Speech and Expression'

Say no to bigots and rascists in Sarawak? We support the Chief Minister, Adenan Satem’s statement fully! But, on the very day he made this statement to the press, known bigot and racist Ibrahim Ali was openly parading himself around Kuching and Samarahan – even the Borneo Post reported his presence in the same article as the Chief Minister’s comments.

What are we, the people of Sarawak, to think?

There are three possibilities. First, Ibrahim Ali is simply making a fool of the Chief Minister of this state, remaining in Sarawak against his expressed wishes. Second, the new Chief Minister lacks the courage to enforce his comments against this man. Third, he is not referring to bigots and racists who are linked to his own party, only those who he believes oppose his political position. Which one is it? If he means what he says and he has the spine to stand by it, then he must throw this hatemonger out of Sarawak for good. 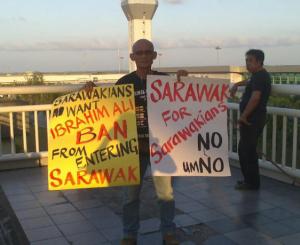 Is Ibrahim Ali a bigot and a racist? Simply type his name into any search engine and you get the all the evidence you need. Jailed for contempt of court, seen using foul language on a television news interview, quoted making sexist remarks against women and mocking a disabled fellow politician – this man is repugnant at best. But this is a man who called on fellow Muslims to burn copies of the Bible. This is a man who threatened a rerun of the worst race riots in the country’s hist ory.

This is a man who began conducting funeral rites at a Chinese New Year celebration. Imagine the outcry if this was a Chinese politician. What would be the response? Perhaps people would ban even their ashes from returning to this country and call for any record of them to be erased from Malaysia’s history. Perhaps people would call for their ashes to be “tossed into the air”, just as Ibrahim Ali did with the former Secretary-General of the Malayan Communist Party Chin Peng. Any one of these three appalling events is evidence of Ibrahim Ali’s bigotry and racism. All three are definitive proof. 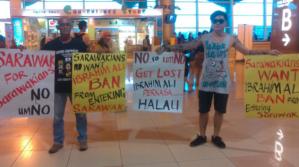 Sarawakians urge the government to ban Ibrahim Ali from the state.

If the Chief Minister’s statement does not apply to this man, then who is it aimed at? Is it another base tactic to smother genuine political debate in Sarawak? Is it another attack on freedom of speech and expression? The new Chief Minister must think carefully about who he chooses to ban from entering this state on these grounds. Yes, the peaceful people of Sarawak should not be infected by racism and religious bigotry. But no, they should not be prevented from hearing legitimate political debate&nbs p;from NGOs and opposition politicians, such as Human Rights activist Ong Bak Kiong, Suhakam Commissioner Jannie Lasimbang, Bersih Chairman Ambiga Sreenevasan, even Journalist Clare Brown. Let them hear both sides and choose for themselves in a free and fair election.

So, if the new Chief Minister truly believes there is no place in Sarawak for bigots and racists, as we all do, then he better show us all what he is made of. People like Ibrahim Ali who spread hate and discord have no place in our state.