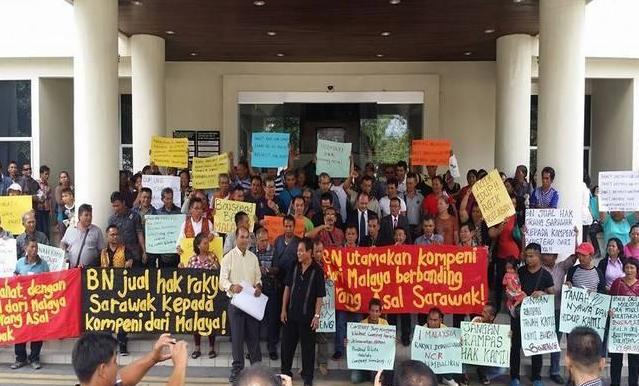 Villagers from Ulu Baram scored a minor victory in the High Court on Wednesday in their long-standing land dispute with a state-controlled company which is seeking to restrain them from entering their native land.

They were all joy when they learnt that they have access to some 1,600 ha of their land in Tuyut, Ulu Baram, after the court dismissed the application by the company to strike out the villagers’ case and stop them from entering the land.

Some 100 of the villagers, carrying placards and banners in Bahasa Malaysia and the Iban language, had gathered outside the court to reiterate their call to the state government to respect their land rights.

Over the past month, the company had engaged “security guards” to guard their plantation and prevent villagers from entering the land which had heightened the longstanding dispute.

The defendants are Niga ak Ngayong and 61 other villagers from three villages – Bukit Limau, Sungai Tuyut and Long Nyiru.

They are being sued by Boustead Pelita – a joint venture between the state Land Custody Development Authority (LCDA) and the Boustead group – to vacate the native land.

The state government had issued a provisional lease over the land to the agency in the 1990s.

The villagers had engaged in years of fruitless meetings and negotiations with the company and the relevant authority. In 2012, the company sued the villagers.

“The villagers later approached us. We filed a defence and counter claim on the land which was allocated to the villagers in the 50s under the British rule,” their counsel Harrison Ngau told fz.com.

The land dispute continued with the company filing an application to strike out the villagers’ counter claim on the grounds that they were late in submitting their case.

The company argued that the villagers should have filed the case when the company first entered to develop the disputed area in late 1990s.

However, in a much awaited ruling today, High Court judge Stephen Chung dismissed Boustead Pelita’s application as there were disputed facts and issues for trial. He ordered the case to go to full trial. The hearing dates have yet to be fixed.

Even though the ruling was encouraging, Harrison said it would be years before the landowners can rightfully claim their NCR rights over the lands due to the lengthy court proceedings.

“It is a similar story everywhere in Sarawak. The Government has issued provisional lease to LCDA and the area overlap with local community’s land.

Ngau, a promiment land rights lawyer, said he had brought up the issue to the authority for years but the trend never seems to stop.

“The poor villagers are those who need help. Why was land was given to the state agency and other big companies without even consulting the villagers first?” asked Harrison.