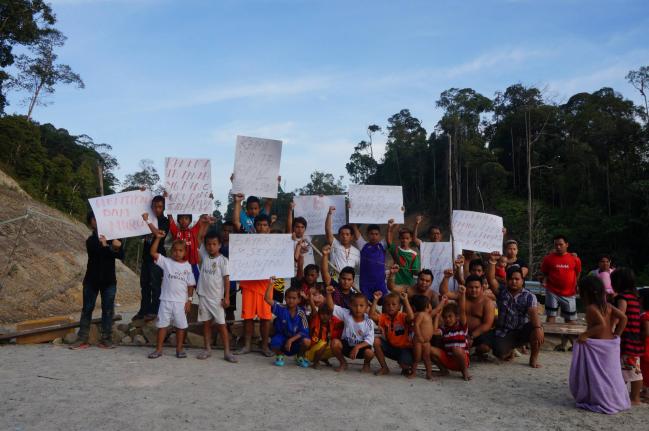 Penan at Murum had manned their blockade for 77 days.

(LONDON/KUCHING) In an exclusive interview with Radio Free Sarawak earlier today, native land rights (NCR) lawyer Abun Sui Anyit announced that indigenous Penan protestors at the Murum dam site have been strong armed by the state government into accepting a token compensation package of just RM23,000 per family and have ended their dam blockade after 77 days.

Earlier this week, Sarawak’s Chief Minister Taib Mahmud made headlines when he called the Penan’s humble requests for a fair compensation package “outrageous” and stated he would not offer “a sen more”.

When contacted earlier today, Abun Sui stated that “Based on my telephone conversation with Gereng Jadung of Long Tangau today, they were forced to move. Furthermore, their old longhouses will be flooded soon and the logging road, especially the bridges will be destroyed by the owner’s company that will make it difficult for their movement and therefore difficult for them to proceed with the blockade.”

Abun Sui went on to state: “A chieftain changed his mind by forcing the Penans to move to a new resettlement at Metalun. Most of the Penans were influenced by an additional RM8,000 offered by SEB, making it RM23,000. However, they will still protest and are determined to continue with a court case against the government and SEB”

For the full interview listen to Radio Free Sarawak: